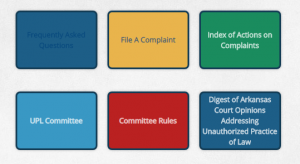 The Arkansas Supreme Court’s Committee on the Unauthorized Practice of Law recently unveiled a new page on the Arkansas Judiciary website.

Justice Robin Wynne is the Supreme Court’s liaison to the UPL Committee. “The Committee takes its responsibilities very seriously, and the new website will give the public an opportunity to learn about the Committee and everything it does,” said Justice Wynne.

“The duty of the UPL Committee is to protect the public from the harm that is often caused by the unauthorized practice of law,” said Charlene Fleetwood, the Office of Professional Conduct attorney who staffs the committee and handles investigations of complaints along with paralegal Alli Mack. “In addition,” she said, “the UPL Committee is charged with deciding if a person or organization is engaged in the unauthorized practice of law when a complaint is filed.” She noted that complaints are received from persons harmed by the unauthorized practice of law as well as judges, the Arkansas Attorney General, the Arkansas Insurance Department, attorneys, and others who become aware of questionable conduct by non-lawyers. The committee, which is composed of both lawyers and non-lawyers appointed by the Supreme Court, addresses about 30 complaints a year. Responses by the committee range from a letter of caution to a court injunction. “Recent actions of the committee are available for review on the new webpage,” said Fleetwood.