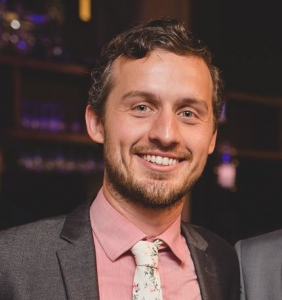 Jordan Bates-Rogers has been selected to lead the Arkansas Access to Justice Commission and Foundation effective January 1, 2021. He assumes this role upon the departure of Amy Dunn Johnson, who was elected in November to serve as circuit judge for the 15th Division in Pulaski and Perry Counties.

Bates-Rogers steps into this new role having already accomplished a number of important projects for the Commission in his role as Program Coordinator–a position he has held since 2016.

“Arkansas Access to Justice is incredibly fortunate to have Jordan’s vision and leadership as both the Commission and Foundation work toward ensuring that all Arkansans have a meaningful opportunity to get the justice they need and deserve,” said Johnson. “He is a talented, creative leader who not only has the experience and skills to carry this work forward, he is intentional about doing so in a way that is responsive to the lived experiences of marginalized communities who face some of the most daunting barriers in accessing the help they need to solve everyday problems. I’m confident that he will do a tremendous job as Executive Director,” she said.

Johnson, who has served as the Arkansas Access to Justice Commission’s first full-time staff member for the organization since 2009, was hired for the role during a time when the Arkansas Interest on Lawyers Trust Accounts Program was facing a financial crisis as a result of the 2008 economic downturn and when courts were seeing an explosion in the number of self-represented litigants. She successfully navigated the IOLTA Program through a merger and rebranding that allowed for the program’s growth and expansion so that it was able to continue making grants to support the delivery of civil legal services. Johnson also spearheaded a grant-funded project that resulted in the development of a plan for the expansion of services for self-represented litigants and oversaw a comprehensive study on the economic impact of legal aid programs in Arkansas. Her decision to run for a judicial seat was inspired by the daunting challenges that remain–ones she believes can be tackled with greater involvement from judges around the state.

Sponsor a Free Legal Answers Clinic with Access to Justice!