The Arkansas Access to Justice Foundation proudly supports the work that legal aid staff and pro bono lawyers do to ensure that vulnerable Arkansans have access to help for critical legal problems. The stories below tell the stories of Arkansans helped by the Center for Arkansas Legal Services and Legal Aid of Arkansas.

Ethel Ross is a 76-year-old grandmother raising her 13-year old granddaughter in east Arkansas.  This young teen was abused as an infant, and still undergoes therapy and medical treatment.  Her condition qualified her for social security disability payments, at least until two years ago when she was dropped from the program.  Not only did the government drop her from the program, but it sent Ethel a letter asking for $18,000 back.  Afraid she was going to have her own Social Security taken away to pay the huge bill, Ethel contacted the legal aid office in Jonesboro.  With the help of paralegal Charis Langston, Ethel was able to get her granddaugter’s benefits reinstated, and she received a back payment for two years worth of benefits.

Six-year old Brendan lost his father, Jeffrey Henthorn, when Henthorn was serving on his second tour of duty in Iraq.  Henthorn and Brendan’s mother Sandra had never married, and that created a legal void for military survivor benefits.  Pro bono attorney Craig Campbell of Northwest Arkansas took Brendan’s case, and within just a few months was able to win a guardianship order that the military required in order for Brendan to receive survivor benefits.  The boy was awarded $50,000, which Campbell put in a trust, and Brendan now receives a monthly survivor benefit of $1,100 in support.

Miriam met her husband working on a cruise ship.  She moved to Arkansas and began a family.  But her husband became abusive toward Miriam and used her immigrant status against her.  He took her two daughters away and left her on the street.  Miriam sought the help of Center for Arkansas Legal Services Attorney Dustin Duke, who was able to refer her to an immigration specialist and obtain an order of protection and temporary custody of her children. 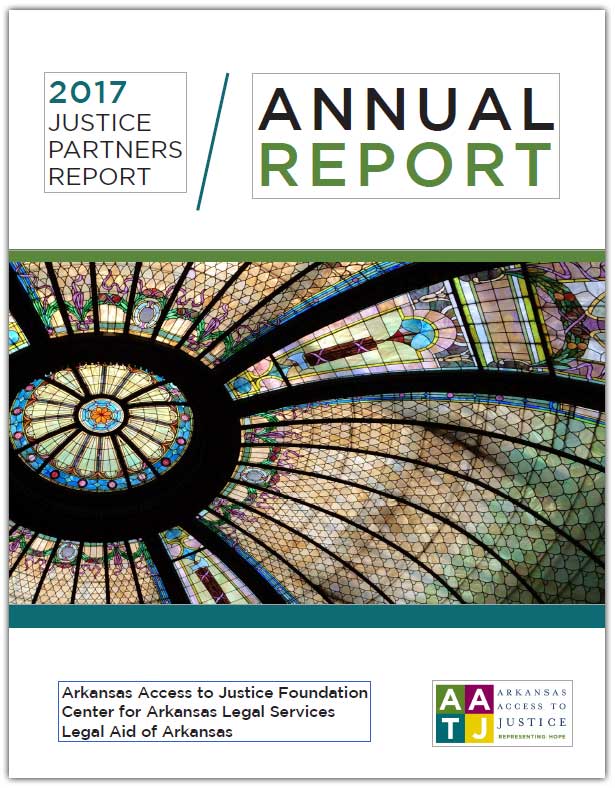 Guardian for the Guardians

The client, a grandmother whose daughter had stage four cancer, wanted to make sure her grandchildren would be taken care of. The father’s whereabouts were unknown, and the family feared that the children might be placed in foster care if they couldn’t find help.

The Reynolds Cancer Support House had been assisting the family and called the Center for Arkansas Legal Services on behalf of the family to express the urgency of the matter. Kathryn Stocks volunteered to handle the case, even though three days earlier, she’d accepted another guardianship case.

Stocks obtained the guardianship for the grandmother of three and managed to resolve the entire matter in less than 25 days, helping the children secure a stable home.

A Christmas to Remember

The client was referred to the Arkansas Volunteer Lawyers for the Elderly (AVLE) Program by the East Arkansas Area Agency on Aging for a debt collection issue. The client, a permanent resident alien and Spanish speaker, wanted help negotiating lower monthly payments on her debts. Legal Aid of Arkansas referred her to volunteer attorney Joe Barrett, who waived his fees.

Rather than negotiating lower payments, Mr. Barrett helped the client discharge more than $17,500 in a Chapter 7 bankruptcy. The client thought that she still owed the attorney for his fees, and Legal Aid called to tell her during the Christmas shopping season that she did not owe Mr. Barrett any money. The client was so pleased that she sent thank you notes and Christmas cards to Legal Aid, thanking them for all that they had done for her.

The client, a 20-year old student at the University of Arkansas at Fayetteville, worked at a local bookstore and attended school full-time. She was estranged from her family and could not get them to help her financially with school costs or to supply information that would help her secure financial aid. Due to this, she was turned down for student aid and told that she needed an attorney or no help would be available. Feeling hopeless and under emotional and financial strain, the client called Legal Aid of Arkansas.

Pro bono volunteer Matt Osman was assigned her case, and through his efforts, the client was declared an independent person. As a result of this new status, the client was able to get a generous Pell Grant and a scholarship and to move forward with her life.